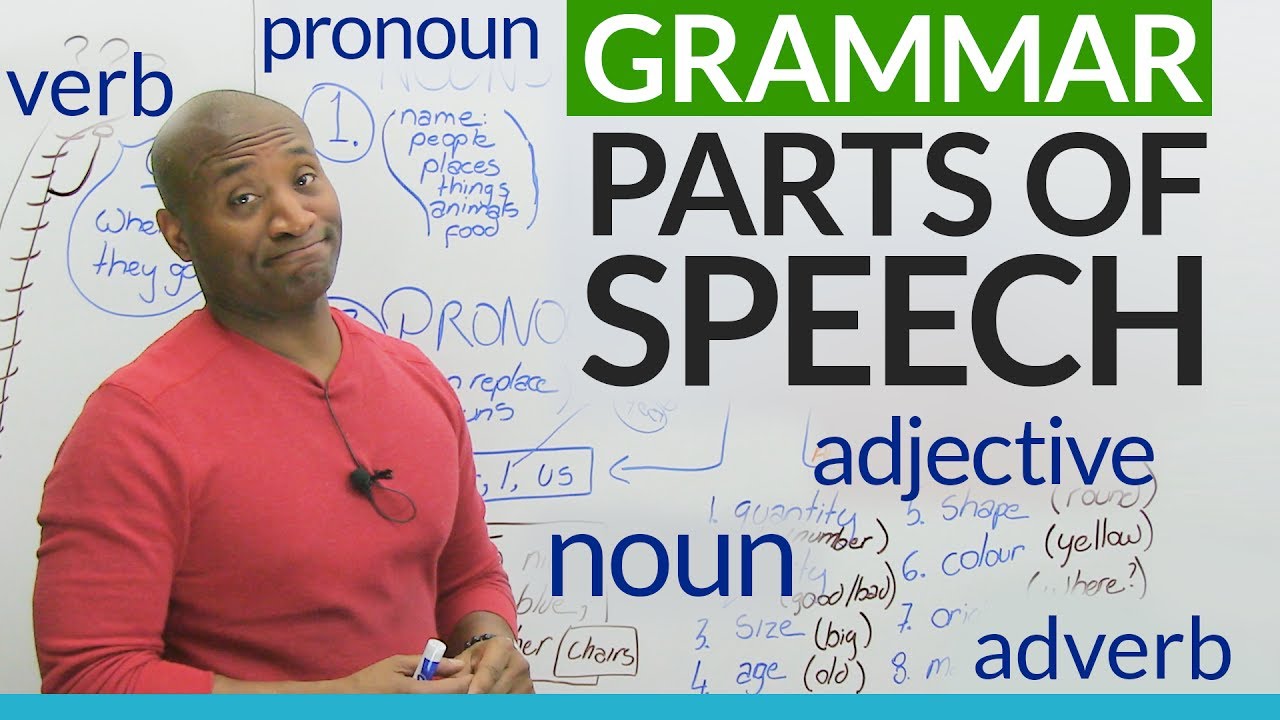 In this video, I will go over the different parts of speech in English. We will be looking at the use of nouns, pronouns, adjectives, verbs, and adverbs. You will also learn how to arrange them in a grammatically correct sentence. Also, I will teach you in what order to place the adjectives if you have more than one. For example, do you have a “big, white, excitable dog” or a “white, excitable, big dog”? Find out by watching this lesson and doing the quiz afterwards at

Hi. James from engVid. I would like to talk about something that will help you understand English, and it’s two things. Number one are parts of speech. What are the parts of speech and how do you use them? The second is called syntax, which is a very complicated word for word order. Where do you put the words in a sentence? In some languages they have a different word order, some languages it doesn’t really matter, but what my job today is, is to show you where the words go and: What do they basically mean-okay-in the parts of speech? As E said: “Words. Where do they go?”

Now, if you’re new to English or even if you’re an intermediate student, sometimes this causes you problems. Right? You’ve heard the terms: “preposition”, “determiner”, “syntax”, and you’re like: “Oh, it’s so complicated.” Today’s lesson will be simple. You can go over this again and again. It will help you understand and use English better.

So I’m going to start off with the most basic part of parts of speech, and I want to start with the things part. Things. Not actions, but things. I am a person. My watch is a thing. Okay? An animal, a cat or a dog, or an apple, these are things. We call these things nouns, because nouns name people – Hi, I’m James; places – Toronto, Ontario; things – my watch; animals – a cat, meow; and food – an apple. Okay? These are nouns. Example: boy, dog, apple. Okay? Nouns name these things.

Now, we talked about word order or syntax. Let me explain this. In order to use a pronoun first you must use the noun. Okay? You introduce the noun and then you can replace it with a pronoun. That’s why you see number one then number two. You cannot just start with a pronoun. If I started a sentence at the beginning: “He went to the store.” The very first thing you will say to me is: “Who’s he?” I go: “Oh, James went to the store and he bought the apples there.” And you go: “Oh, now I know who he is.” So, pronouns kind of number two because you have to actually introduce first with a noun, then you can replace it with a pronoun.

Now, we have several types of pronouns. I’m just going to go over and show you a couple of them so you get an idea. Pronouns include: “I”, “we”, which are subject pronouns. Object pronouns when we’re talking about something that’s not us, but something on the other side that receives action, as a subject pronoun I do things. I run. Right? We eat dinner. We’re talking to them. Now, when we say “them”, you go: “What?” Well, they are receiving it and we call those object pronouns. Okay? So the most basic ones are subject and object pronouns. One is doing something, one is receiving. There are reflexive pronouns, like: “himself” where somebody is talking about themselves. “He built the house himself.” So he’s talking about him as an object, but reflecting it back to himself. We call it reflexive pronoun. Okay? There are others, but I’m not going to get into them right now because I want to keep this simple just so you know what the parts of speech are, and you can always come to engVid to come and see other lessons in which we go deeply into reflexive pronouns, object and subject pronouns. Okay? Cool. So we talked about how pronouns can replace nouns, and we’re good with that. Yeah?

So let’s go to stage number three, because once you’ve replaced them, how do you know the difference between them? Apple, apple. I don’t know. That’s when we have adjectives. Adjectives. The word itself can be broken into two parts: “ject” and “ad”. But remember… Do you remember when I said subject and object, and I gave you the example? I said, for instance: “I” is a subject pronoun. Right? Subject, yeah, I’m good at this.